The Hardys of Park Head

I have been collecting information about the Hardys of Park Head for some time now. My interest was because they were linked through marriage to the Smiths of Melmerby in the mid-19th century and, later, through the transfer of land ownership to two Smith descendants at the end of that century.

I have already mentioned the Hardys a number of times when writing about John Smith of Melmerby and his wife Mary Hardy. They were married in 1849 in Renwick Parish Church. I also mentioned that John and Mary’s two youngest sons, John and Christopher Smith, had taken up farming with the Hardys in Park Head, near Kirkoswald. (The place name is written both as Park Head and Parkhead; I have chosen to use the former).

I have also explained that the children of John and Christopher Smith were beneficiaries from the wills of two of their aunts, Hannah and Mary Ann Smith (this was described in the post titled The Misses Smith of Penrith). So I thought it would be worthwhile to describe what I know about the Hardys and how they affected the lives of John and Christopher Smith, who were second cousins of my grandfather William Smith of Blackhall.

The Hardys lived on a farm called Low Huddlesceugh, near Park Head, a hamlet in the parish of Kirkoswald. The farm was roughly equidistant between the small hamlet of Renwick and the even smaller hamlet of Park Head. As far as I can determine, the Hardys had lived on that farm as a freehold property for several generations before Mary Hardy was born in 1822.

The farm is identifiable on Ordnance Survey maps and also can be found on Google. First, though, a bit of geographical context.

If you have read other posts on this blog, you will know that the Smiths of Melmerby lived in the upper Eden Valley of Cumberland, very close to the Pennines. The small town of Kirkoswald is about 5 miles (8 km) north west of Melmerby.

Looking more closely at the Kirkoswald area to see where Park Head and Renwick are, here is a map that shows their geographic relationships. Park Head is so small that it does not merit a place name on the Google map even at this scale so I have added it in.

Mary Hardy’s mother was Eleanor Haddock, who was from Kilburn Parish in Yorkshire. Christopher and Eleanor were married in Yorkshire, in Felixkirk Parish in 1818. (Eleanor was from near Thirsk – many miles away from Cumberland and it would be interesting to know how she met her future husband.) Christopher and Eleanor had seven children: four sons and three daughters. One daughter Ann died at the age of 13 in February 1850. One son, George, died aged 21 later in the same year.

The change of description and location for the Hardys is not significant. A landed proprietor was another name for a yeoman farmer. Park Head was usually (although not always) the location assigned in later censuses although the directories used either Low Huddlesceugh or Park Head. I do not think the location of the Hardy farm had changed; only the description of its location.

The Ordnance Survey map for the area enables us to see where Low Huddlesceugh farm was (and still is) located, between Park Head and Renwick.

In November 1876, Christopher Hardy died and his eldest son, the fourth Christopher Hardy, took over as head of household for himself, his two younger brothers and his sister Eleanor. Also living with them in the 1881 census was their niece Mary Ann Smith.

So I have concluded from that record that both sons inherited the land at Low Huddlesceugh. I do not know what the youngest son Donald received. He died in 1889.

By the 1891 census, the Hardy household consisted of Christopher Hardy, farmer aged 70, his brother Thomas, then 65, his sister Eleanor, aged 57, their niece Mary Ann Smith, aged 36, and their nephew John Smith, aged 30. (Christopher Smith, aged 25, was still living at home in the Smith household working for his oldest brother George Hardy Smith on the family farm in Melmerby.)

In the 1897 Kelly’s Directory of Cumberland, both Christopher and Thomas Hardy are listed as farmers in Park Head (perhaps the distinction of yeoman from farmer was fading by then although it re-appeared later in some other directories).

Thomas Hardy died in 1898 and the oldest brother Christopher Hardy died in 1899. Because none of the brothers married and had children, there were no Hardy sons to take over the family farm.

Christopher Hardy did have a will which was given probate in December 1899; the executors were Christopher Smith and John Smith yeomen and Thomas James Scott solicitor. The estate was valued at £5,251 3s 3d (worth about £560,000 today). From this I assume that John and Christopher Smith were farming somewhere in the Park Head area and either had ownership of the land there or were both owners of the Hardys’ Low Huddlesceugh property.

It is worth noting here that the British government had established a regime of death duties starting in 1894 and the effects of this on property owners – even rather small owners like the Hardys and the Smiths – cannot have been good for enabling them to help the following generations to continue living on the land.

From this record, I think it is clear that Christopher had taken over the ownership of the Low Huddlesceugh farm. I cannot find a reference to his older brother John in the 1901 Directory although he does appear in the 1901 census. At that time, John Smith was living at Scales, in Staffield, another small community of the Parish of Kirkoswald. John was then 40 years old, a farmer, with a wife Elizabeth (Simpson) and a son Thomas Hardy Smith, aged 2.

Tracking someone called John Smith in any English community is not easy so I am unsure where this John was living from 1901 until 1911. He may have continued to live in Staffield for a time. By 1908, however, he was probably living in Park Head because that is where his wife Elizabeth died. In the 1910 Kelly’s Directory of Cumberland John Smith was listed as a yeoman, Park Head, and his brother Christopher also as a yeoman, Low Huddlesceugh.

The 1911 census records being the latest available, any other information to be found about the Smiths of Park Head and Low Huddlesceugh is unavoidably sketchy. Both John and Christopher Smith died at relatively young ages. John died in 1917 aged 56 and Christopher died in 1922 – also aged 56. Christopher’s wife Hannah lived until 1926.

Both brothers left behind children who were too young to manage their own affairs. John’s son Thomas Hardy Smith was only 9 when his mother Elizabeth died and he was 18 when his father died. John Smith did have a will and probate was granted with limited administration to his older brother George Hardy Smith of Melmerby. The probate record describes John Smith as a yeoman of Park Head. The value of his estate was £4,372 18s. (that would be worth at least £233,000 today). I do not have a copy of his will; nor do I have any information on what happened to his land or to his son.

There is more information about Christopher Smith because I do have a copy of his will. Probate was granted to Hannah Smith widow and Hartley Graham solicitor. The estate was valued at £2,316 4s 4d. This was considerably less than the estate of his brother John just a few years earlier. Christopher’s estate would be worth about £120,000 today. This would not include the value of the land.

The only other glimpse we have of Christopher Smith’s family at Low Huddlesceugh can be found in the 1939 Register – a valuable source of information about people in England just at the start of the Second World War. Living at Low Huddlesceugh in September 1939 were: Christopher H Smith, general farmer; John G Haugh, poultry farmer and his wife Mary H Haugh – Christopher’s second sister Mary Hannah Smith. Living not far away at Town Foot Farm in Renwick was Andrew Greenop, mixed farmer, and his wife Sarah Eleanor Greenop – Christopher’s oldest sister – with John Stanley Greenop, aged 9. And living at Brunswick Terrace in Penrith was Robert W Thompson, chauffeur, and his wife Clara A Thompson – Christopher’s youngest sister Clara Anne Smith.

So we know that all four of Christopher Smith’s children managed to survive to adulthood. The three daughters were married by 1939 but Christopher Hardy Smith was not. I have not found any evidence that he did marry. He died at Low Huddlesceugh in 1960 at the age of 57 and was buried at Kirkoswald Parish Church.

The Hardys of Park Head were long established in the Parish of Kirkoswald as yeoman farmers. When they died out in the 1890s, their heirs were Smiths from Melmerby who continued farming in Park Head. They too seem to have died out by the 1960s.

A ground-level image gives some idea of the farm at Low Huddlesceugh today. 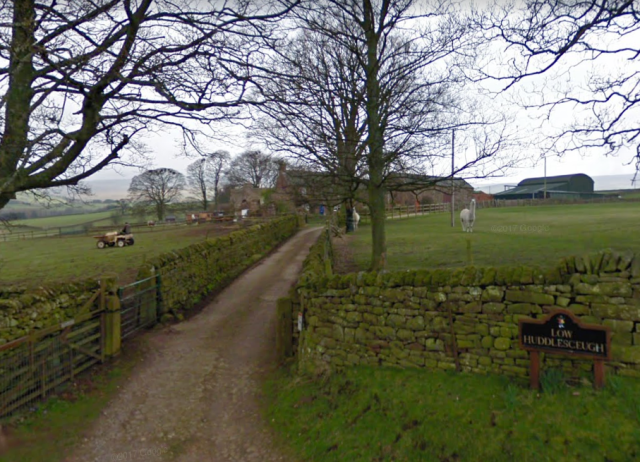